If Steven Spielberg’s Jurassic Park (1993) was an incredible dinner feast you had at a Friday night party, then the Jurassic World: Dominion is the heated leftovers of the same dinner, the morning after.
By RITWIK JAY Tue, 14 Jun 2022 Ever since the three Spidermen swung together to reach $1.8 billion at the box office, Hollywood has realised that nostalgia is a profitable commodity. Now it churns out sequels (or prequels, if you consider Star Wars) to keep a franchise going. It brings back characters from the previous films in the franchise and it gently reminds the audience of how great the original movies were. Matrix Resurrections (2021) did it and now, we have Jurassic World: Dominion (2022).

But often, these sequels, in a desperate attempt to recreate the magic of the previous movies, succumb to being a generic, forgettable clone of the originals. They lack their own distinct personality. That is the biggest problem of Colin Trevorrow’s Jurassic World: Dominion. It feels like the reheated leftovers of the incredibly amazing feast that Steven Spielberg’s Jurassic Park (1993) was.

Sure, it will satisfy your hunger if you don’t have anything else to consume. However, it just doesn’t taste the same.

Jurassic World: Dominion opens with a montage of news reports, delving into how the world has changed, ever since the dinosaurs were let loose at the end of the previous film. It soon cuts to Claire Dearing (Bryce Dallas Howard) rescuing adorable plant-eating dinosaurs from illegal poachers. She has come a long way from being the parks operation manager of Jurassic World, in the first Jurassic World (2015), to being an activist and an advocate for dinosaur protection here. Afterwards, Claire goes back to her cottage, nestled in the comforting lap of snow-capped mountains. She has been living there with her boyfriend Owen Grady (Chris Pratt) and Maisie Lockwood (Isabella Sermon) for the past four years. At the end of the previous film, it was revealed that Maisie was actually a clone of John Hammond’s real daughter, Maisie Lockwood. So, in order to protect her from the greedy & malicious world, Owen and Claire took her into this snow-enveloped seclusion. The raptor Blue also lives nearby, and in a manner mirroring Maisie’s story, it has also produced a baby asexually. This apparent peace is woefully disturbed when Maisie and Blue’s baby are both kidnapped.

Jurassic World: Dominion has a corporate thriller story going on as well, in parallel to this. This particular plot line follows Ellie Sattler (Laura Dern) as she investigates the genetically modified locusts, destroying every crop in the Midwest, except those grown from Biosyn seeds. She seeks the help of renowned paleontologist Alan Grant (Sam Neil) and together, the two go to Biosyn headquarters to gather evidence to prove that the corporation is in fact responsible for the global calamity. They are reunited with their Jurassic Park team-mate Ian Malcolm (Jeff Goldbum), who still remains a passionate and vocal rebel against the self-assured undertakings of Jurassic Park/World scientists.

Here, the eccentric Biosyn CEO Lewis Dodgson (Campbell Scott) presents the necessary antagonistic force, orchestrating not only the locust disaster but also, the kidnapping of Maisie and the raptor baby. 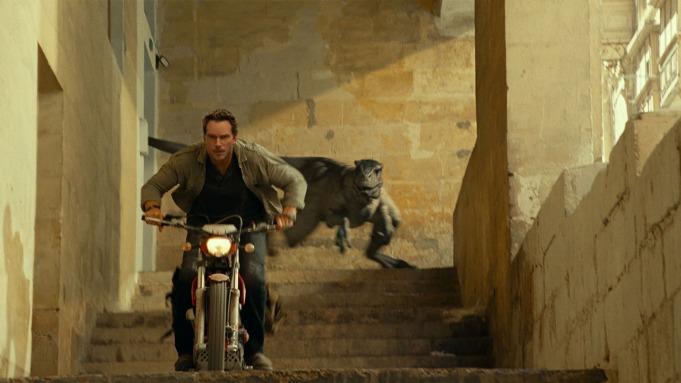 The plotting is weak, since the story attempts to cover a lot of things and ends up stretching itself too thin. It wants to comment on the corporate greed and its tendency to profit off anything. It wants to ponder over ethical dilemmas of genetic cloning and what makes something real (through Maisie’s story). And most importantly, just like the previous Jurassic Park films, it wants to question if bringing back dinosaurs into existence will threaten the established ecological balance between man and nature. All of this shows the story is ambitious in its intentions but its execution simply delivers a very superficial treatment of all the themes. There is no enduring depth to any of the narratives going on in Jurassic World: Dominion.

Instead, the movie is focussed on providing a predictably boring plot, held together by convenient resolutions at different plot points and grand dinosaur spectacles. It completely ignores the long-drawn-out terrifying elements of Jurassic Park, choosing to go for instant gratification by bombarding the audience with one dinosaur chase/fight sequence after another, in quick succession. As a result, none of the dinosaurs feel truly magical or even terrifying.

That is a huge let-down, considering that Spielberg managed to evoke a sense of true wonder and dread with his dinosaurs at a time when the computer-generated imageries were still in its incipient phase. The filmmaker had smartly used his dinosaur models in spare amounts, making them appear in rainy or night scenes. That’s how the T-Rex took on a heart-thumping, frightening form in that iconic scene from Jurassic Park.

This kind of abysmal story of Jurassic World: Dominion seems to affect the performances of the actors as well. Sam Neil looks confused and embarrassed, for the most of the time, to be part of this ludicrous band-wagon. The same can be said for Jeff Goldbum as well. The actor plays an outspoken character who voices his frustration against the corporation and humanity’s arrogant tendency to control the complex nature. Looking back at his performance, it just feels like Jeff Goldbum was channeling his own inner rage on being part of this franchise filmmaking. Bryce Dallas Howard seems to attempt her best but all of it seems plagued by the story. Chris Pratt, on the other hand, seems to repeat what he mostly does in almost every movie that he is in.

However, Campbell Scott’s performance does bring a fleeting delight to the screen. He adds his own creative touch to Dodgson’s character, giving him unique body expressions, peculiar wordings and pauses. His cheerful tone and the stone-cold gaze present a far more sinister version of Elon Musk.

Jurassic World: Dominion does feel enjoyable in a few places, most notably because of John Schwartzman’s cinematography and Micheal Giacchino’s unnerving score. Not to forget, the iconic John Williams’ score playing in the background as the old Jurassic Park co-stars reunite on screen, also adds a beautiful touch to the movie.

But none of these are enough to save the film from the convoluted mess that it is. As the dinosaurs, it showcases, this franchise should have been extinct a long time ago.

Jurassic World: Dominion is now playing in theatres near you.